I spent my childhood growing up in the Himalayan foothills of India and feel delighted anytime I travel back to these mountain ranges. One of my favourite memories of travelling through the Himalayan ranges was to the Nathula Pass nearly 10 years ago.

Nathula Pass, at 14200 ft above sea level, is on the Indo-China border in the state of Sikkim and was part of the old Silk Route. Nathula Pass connects Sikkim to China’s Tibet Autonomous Region. This route was was closed in 1962 but was reopened in 2006 and has, ever since, served as an official Border Personnel Meeting point.

Nathula Pass plays a key role in the Sino-Indian trade and also reduces the journey time for travellers to Rumtek Monastery and to Lake Mansarovar.

Travel to this border area is restricted and a permit is required to visit Nathula Pass. There are checkpoints where permits along with photo identity cards are checked thoroughly. 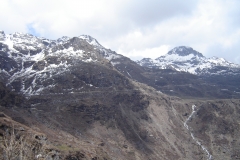 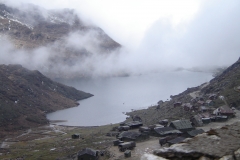 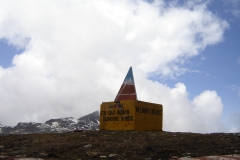 After crossing the Tsomgo lake, the drive uphill is beautiful with areas covered in rich flora, snowcapped mountains and numerous lakes. The road to Nathula is one of the highest motorable roads in the world and is quite narrow and treacherous. Travel uphill and downhill for the last few kilometres are one way and there is a set time for this. Vehicles going uphill reaches a certain point and have to wait for the vehicles coming downhill. This is controlled and timed with military precision. 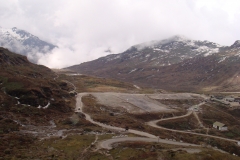 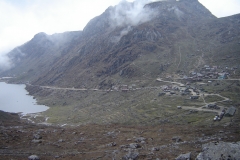 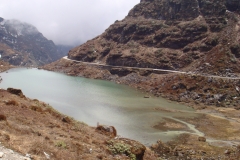 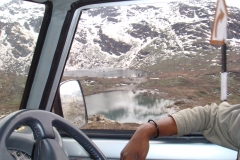 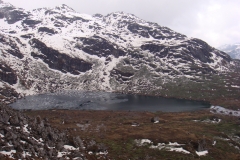 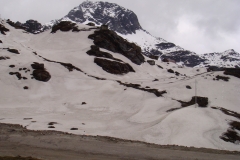 The twin lakes just before Nathula are called the Sarathang Lake and the Nathula Lake. I travelled to Nathula during the month of May and at that time the lakes were partly frozen.

Once you reach the end of motorable road to Nathula, you can take the stairs leading to the Indo-China border. The barbed wire has been replaced with a 10 m stone-walled passageway. 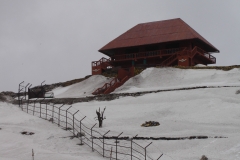 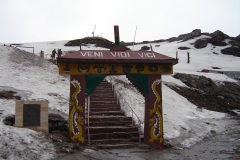 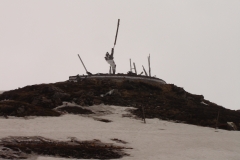 Even during summer months, most part of Nathula is covered with snow. The air here is also thin and can cause breathing problem for people not used to these altitudes. 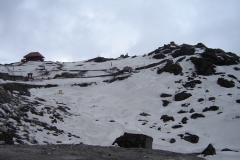 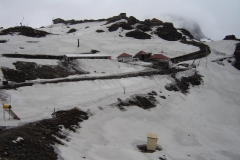 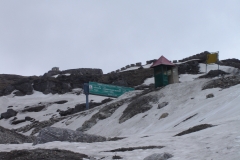 On the way to Nathula, there is a hill with its side displaying the words ‘Mera Bharat Mahan’ [My India is great] in huge letters. Local people call it the Mera Bharat Mahan hill.

Also at around 13000 ft, the ATM at the gift shop I was told, is the world’s highest. That was 10 years ago so not sure if that is still the case.

Nathula being on the Indo-China border is always under observation both by Indian and Chinese armies. 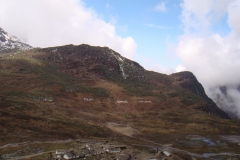 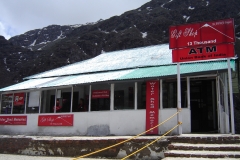 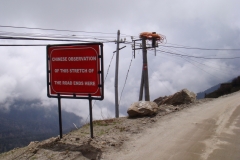 You’ll feel a sense of awe and respect standing below the the Nathula memorial. Hidden beneath the wreath is the famous Kohima epitaph. I am sharing the beautiful words here as I know this by heart as I spent my childhood in Kohima and saw this regularly at the Kohima War Cemetery during our numerous school trips.

WHEN YOU GO HOME

TELL THEM OF US AND SAY

WE GAVE OUR TODAY

During the return journey, I remember the traffic jam but with such spectacular scenery around there was little to complain about. 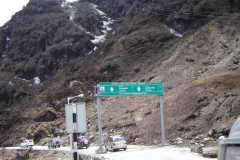 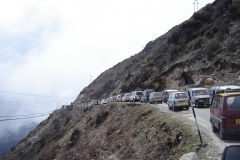 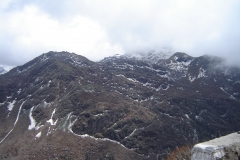 The road to Nathula Pass is prone to landslides during monsoons and snow sludge in winters. Temperature can drop to around -25°C during winters and summer day time temperature can be around 10°C.

June to September is best avoided due to monsoons and landslides, winters are harsh, so April to May is the best time to visit Nathula.

It was an incredible experience to travel to Nathula Pass and I am glad I experienced it from up and close. Yes, I proudly treasure my badge“I scaled Nathula, 14200 ft, India-China border!” which I got from gift shop run by the Indian army.

Located between Nathula and Jelepla pass at an altitude of 13,123 ft and about 54 kms from Gangtok is Baba Mandir. It is a shrine built in the memory of Baba Harbhajan Singh, an Indian army personnel who died near Nathula in 1968. Soldiers built a shrine in his honour and this has now become a pilgrimage centre.

Baba Mandir has a fascinating legend as the local people believe that Baba Harbhajan Singh still guards the international boundary between India and China.

Tsomgo Lake, also called Changu Lake is about a kilometre long glacial lake in East Sikkim, around 40 kms from Gangtok. It takes around 2 hours to reach Tsomgo Lake from Gangtok.

The lake reflects different colours with different seasons and is revered by the locals. It is frozen during the winter months. Travellers can walk around the shores of the lake or even take a yak ride.

You can try the dried yak milk cheese called chhurpi available in small shops around Tsomgo Lake. A small piece of the hard type can take about 2 hours to melt in the mouth.