More than a decade ago, I visited the beautiful city of Prague, the capital of Czech Republic, also known as Czechia. Prague is also the historic capital of Bohemia. It is a short flight from London but since I combined my trip with Vienna (I still have to write about my Austria travel), I travelled to Prague by train from Vienna. The rail journey is about 4 hours on a fast speed train and the route is quite scenic.

Prague central station is the largest in the city and is an international hub. Trains to and from major European cities are linked to Prague. From the central train station I took public transport to reach my hotel. The hotel where I stayed was part of the Prague Castle and the views from the top of the city, the red brick coloured rooftops, the Vltava River with its bridges all looked very scenic.

The next morning after breakfast it was time to explore the city. Prague’s historic centre is a UNESCO World Heritage Site since 1992 and is best explored on foot. Prague is one of the most visited cities in Europe and has rich heritage and culture. Some of its top sights include the Prague Castle, Old Town Square with the famous astronomical clock, Charles Bridge, many museums and galleries. 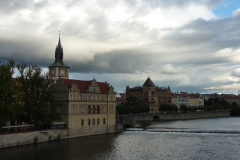 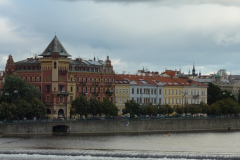 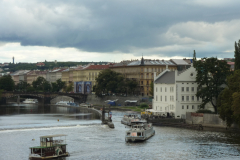 I loved the old town square and visited it during the day and also during night time. It is worth doing so and one of the best way to experience the sights in different lights. It is a place where many historic and iconic buildings are located. The Old town square lies between Wenceslas Square and the Charles Bridge.

The Old Town Square as I remember with many beautiful buildings, shops, cafes and the area buzzing with people most times of the day. I saw groups of people doing Segway Tours of the city and it seemed quite popular. I preferred walking which I normally do as I find that is the best way to soak in the culture and vibes of the place I am visiting. Prague is a really beautiful city and I can still remember many of the sights I saw quite vividly. 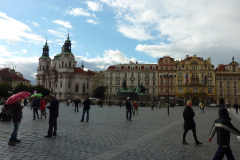 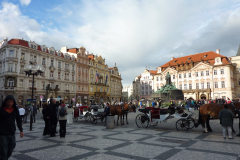 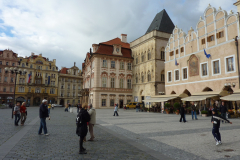 Church of Our Lady before Tyn

The Gothic church which stands in the heart of the Old Town Square is a sight which cannot be missed as it is quite a prominent architectural masterpiece. Since the 14th century, the Tyn Church has been the main church of the old town square. The church has two towers each 80 mts high. The spires on each tower has 8 small spires in two tiers. I did not visit the church but I heard and also have read that is worth a visit and see the interiors for its architecture and interiors. 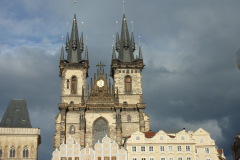 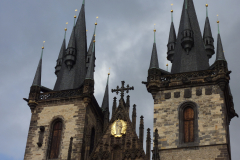 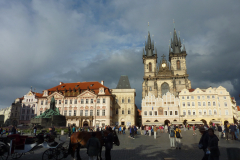 Next to the Tyn Church the striking building which I noticed in the Old Town Square is the Kinsky Palace, which is now an art museum under the National Gallery. The Rococo style building was once a palace. It belonged to the Kinsky family and hence the name. The exterior of the building looks classic in its pink and white paint.

The Town Hall of Prague is located in the Old Town Square and it is one of the city’s most visited sights. The tower of the Town Hall, completed in 1364, was the highest tower in the city during the Middle Ages. The Town hall consists of the many smaller houses. I did not visit the interiors of the Town Hall but definitely remember standing outside with hundreds of other people to watch its famous timepiece.

The astronomical clock built on the Town Hall is also called the Prague Orloj. The first version of this famous clock was completed in 1410 and made by clockmaker Mikulas of Kadan and the astronomer Jan Sindel. 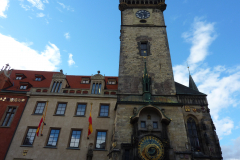 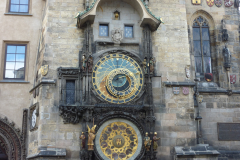 The world famous medieval astronomical clock on the side of the Old Town Hall of Prague, is the third-oldest astronomical clock in the world and supposed to be the oldest clock still in operation. The clock has three main features – the astronomical dial, the calendar dial and the crowd pulling moving figures.

There are four figures, two on each side of the clock face. From the left, the figures represent vanity, miser, death and earthly pleasures. There are twelve apostles who appear on the two windows above the clock face. Every hour hundreds of people wait in front of it and look up to enjoy the hourly gongs and the movements of the figures on the watch. At the hour, when the skeleton strikes the time, all the figures move their heads sideways and the twelve apostles appear one by one on the windows. 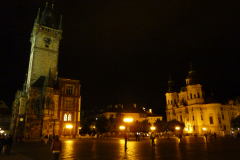 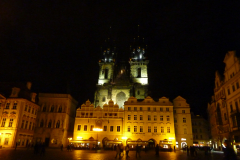 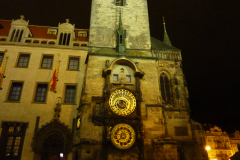 I watched it twice, once during the day time and once in the evening. Both time it seemed magical that such a complex mechanism is still functioning smoothly.

The Jan Hus Memorial  is the huge monument which stands at one end of Old Town Square and depicts the victorious Hussite warriors and Protestants who were forced into exile. It was unveiled in 1915 to commemorate the 500th anniversary of the martyrdom of Jan Hus and was paid for only by public donations. 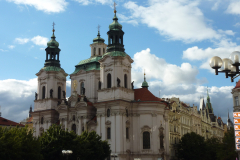 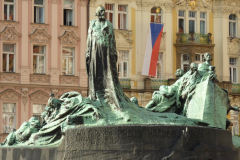 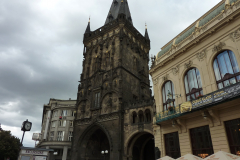 The Church of Saint Nicholas

Another church which I remember attracted my attention at the Old Town Square is the Church of Saint Nicholas. The architecture is late-Gothic and Baroque. The church was built on the same site where a Gothic church from the 13th century once stood. The earlier church was also dedicated to Saint Nicholas.

It was interesting to know that this church was used as a site for Radio Prague during the Prague uprising in 1945, as the main radio building was under attack.

Prague had 13 city gates in the Old Town and Powder Tower is one of them. It is one of the original city gates and also called Powder Gate. It separates the Old Town from the New Town which is across the Charles Bridge. This Gothic tower was intended to be an entrance gate but served as a defence tower.

Since it was used to store gunpowder in the 17th century that is how it got its name. The sculptures on the tower were replaced in 1876 after these were damaged during the Battle of Prague. 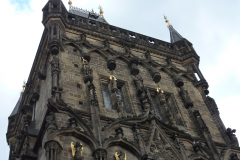 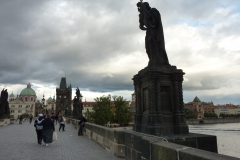 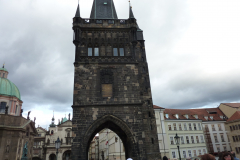 I did walk on the famous Charles Bridge but the day was extremely cloudy and dark so I did not get good photos of the bridge. During old times, the Charles Bridge was the way to connect the Prague Castle and the Old Town. This medieval stone arch bridge was originally called the Stone Bridge but has been known as Charles Bridge since 1870.

If I ever get a change to travel to this beautiful city again, perhaps I would spend more time to explore the sights and not rush through as I did on this trip because I was there only for a long weekend. I will write about my memories of the sights on other side of the Charles Bridge like Prague Castle and the Castle District some time in the future as it feels great to recollect travel memories slowly just like slow travel.