The Swedish city of Malmo

We are already in the second month of February 2022. This being the shortest month I thought of writing a short travel story. During my weekend break to Copenhagen, I also visited Malmo in Sweden which is just across the Oresund Bridge, for a day trip. Malmo is the third largest city in Sweden after Stockholm and Gothenburg, in the county of Scania.

When I travelled to these lovely places in the world, some of which were quite a long time ago, I never thought or even imagined in my fondest dreams that one day I will sit down, reminisce and write about those places. So this page might be filled with photographs which are not so great, but these are totally untouched and presented as I saw and experienced the sights to maintain the authenticity of my wonderful travel memories.

Copenhagen and the Swedish city of Malmo are connected by the spectacular and wonderful engineering marvel Oresund Bridge, which carries both rail and road traffic since 2000. The double decker bridge is the world’s largest cable-stayed bridge for road and rail transport. The train from Copenhagen goes through the lower level the famous Oresund Bridge which is obviously better viewed when you not inside a train. It was used a main location for the TV series The Bridge.

The 7 kms long Oresund bridge consists of a 4 kms long tunnel and an artificial island. It connects the Zealand area of Denmark with the county of Scania in Sweden. It is the longest combined road and rail bridge in Europe. The journey between Copenhagen and Malmo takes about 35 to 40 minutes on the Oresund line which operates 24/7. This train line connecting two countries is used by locals to travel on the other side for business or pleasure.

Some of the sights which I enjoyed during my visit to Malmo are in this travel story. 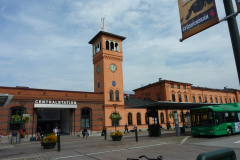 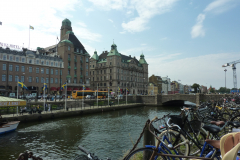 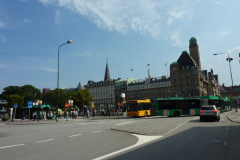 The train from Copenhagen stops at the Malmo Central station which opened in 1856 and is on the Southern Main Line. The exterior of the station building is made with red bricks and the view of the facade looks wonderful from the Centralplan. Malmo Central Station won the Brunel Award for its architecture in 2011.

The city centre is very close to the station. As you walk towards the city centre crossing the Malarbron Bridge, don’t miss to see the Malmo City Coat Of Arms on the inner side of the bridge.

The red house in the water is an art installation Atlantis by Tea Makipaa installed during the Malmo Festival and has been displayed in many European cities. 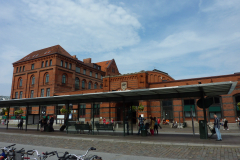 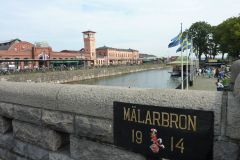 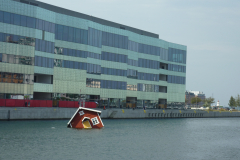 The oldest building in Malmo is the St. Peter’s Church. The church was built  in Gothic styles in the early 14th century. This is the main city church. The church has a nave, two aisles, a transept and the tower, which fell twice and was rebuilt. The current tower is from 1890. 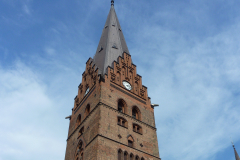 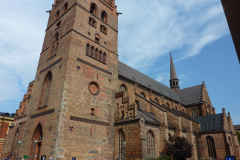 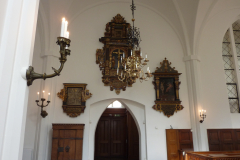 The interiors of St Peter’s Church is decorated with medieval murals and beautiful furnishings. It also has one the largest altarpieces in the Nordic countries which was made in 1611. 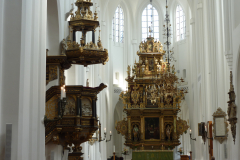 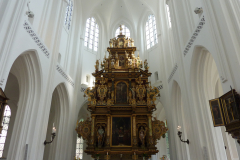 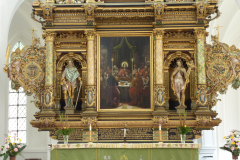 The historical town hall in Malmo is located on the east side Stortorget, in the centre of Malmo’s old town within walking distance of the city’s major attractions. It was the largest two-storied town hall built in the 16th century.

The present Dutch Renaissance style facade was made around 1860 as part of a restoration work while restoring the original facade. The ceilings of the hall are decorated with stucco work. The Knut hall was designed after the Hall of Mirrors of the Versailles Palace of France. This hall is used for special events. One of the most famous restaurants of Malmo, the Radhuskallaren, is located in the cellar of the town hall. 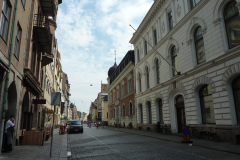 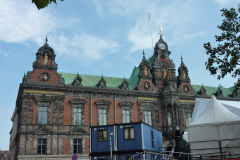 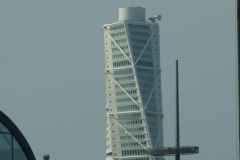 Turning Torso is a futuristic twisted residential skyscraper in Malmo. Standing at a height of 190m it is the tallest building in Scandinavia and is considered as the first twisted skyscraper in the world. Designed by the Spanish architect, structural engineer, sculptor and painter Santiago Calatrava, the building is based on one of his sculptures called the Twisting Torso.

The building was opened on 27 August 2005 and it has 54 storeys with 147 apartments. There is a public observation deck on the 49th floor, and a private club, event halls, conference rooms and restaurant between the 50th and the top floors. 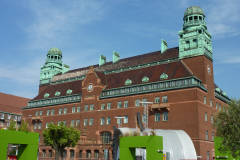 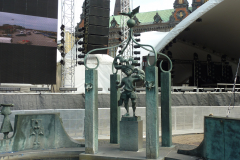 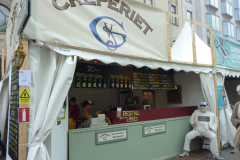 Stortorget, the historic market square in the centre of Malmo was created in 1540. It is the largest and oldest square in Malmo. The Malmo festival takes places in this town square. It is quite easy to reach the town square which is about 4 mins walk from the station.

As you walk out of the train station, cross the Malarbron bridge and the square is straight ahead. At the centre of Stortorget stands the equestrian statue of King Karl X Gustav. Surrounding the square are many historical buildings including the town hall on the eastern side. 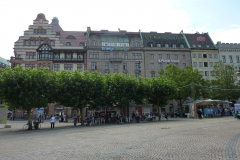 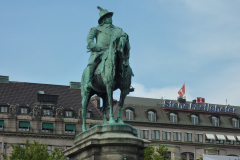 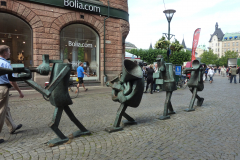 Some others sights worth visiting in Malmo

Malmo Castle (Malmöhus Slott) – Malmo Castle is the oldest preserved Renaissance castle in Scandinavia. It was built between 1537 and 1542 on the ruins of an old fort. The castle is now part of Malmo museums which includes the Malmo Art Museum and the Natural History Museum of Malmo.

Malmo Chocolate museum (Malmö Chokladfabrik) – Housed in the former Mazetti chocolate factory building is the Malmo chocolate museum. There are displays of around 120 years of history of the famous Swedish chocolate brand.

Malmo old town (Gamla Staden) – The old town area includes the Gamla Väster district which has many historical buildings in the west and the eastern part was renewed during the urban planning in the 1960s.

Little square (Lilla Torg) – Paved with natural stones is the historical market square Lilla Torg created in 1590. It is close to the Stortorget and has many small shops, restaurants and bars. It is a popular outdoor meeting place used by locals and tourists.

Sodergaten Street (Södergatan) – This is the main shopping street of Malmo connected to squares of Stortorget and Gustav Adolfs Torg.