A day in Dusseldorf

While thinking about which place to write my next travel story about, I realised I have been to some German cities but have not written about any of them. So I decided to write about one the cities I visited few years back. It feels good to look back at the photos and remember the places I visited and share those experiences with everyone who reads my travel stories.

The two cities which I visited on a short weekend trip were Dusseldorf and Cologne. As I was working full time then, I used to do quite a few European city breaks over the weekends. I am writing about Dusseldorf in this post and will follow up with my Cologne day trip from Dusseldorf soon. 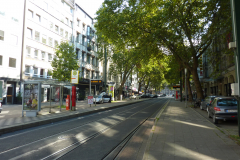 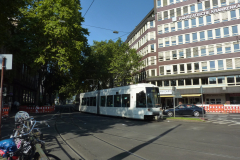 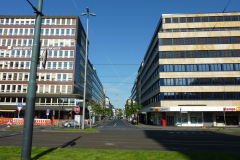 I flew to Dusseldorf from London in the summer of 2014 and took the local train from the airport to reach the city centre. I had booked a hotel in the heart of the city.  It was a mix of sunny and cloudy day as I went out for a stroll in the late summer afternoon.

Dusseldorf is situated at the confluence of two rivers, the Rhine and the Dussel, which is a small tributary. The city is an international business and financial centre, also renowned for its trade fairs. 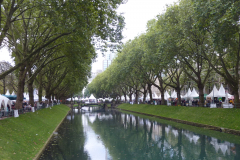 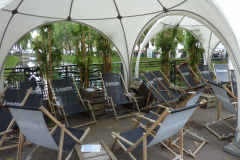 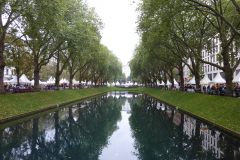 The main boulevard in Dusseldorf is known as Kö (Königsallee). The Königsallee is known for the central canal that flows through it with beautifully landscaped sides. Along the landscaped area there are also pop up tents, to chill out with a beer. Some were used as stalls for selling items, while some were holding exhibitions. This boulevard is also a famous shopping street with luxury shops lined throughout. 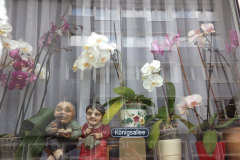 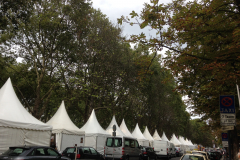 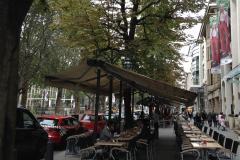 Dusseldorf Altstadt, which means the old town, on the east bank of the Rhine is the historic town centre where the town hall Altes Rathaus is located. The Düsseldorf Rathaus was built by Heinrich Tussmann and has been standing on the north side of the main marketplace since 1573. In front of the town hall, on the market square, stands the equestrian monument of Jan Wellem. 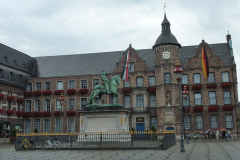 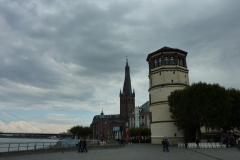 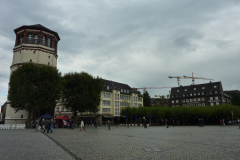 The Castle Tower in Düsseldorf is used as the maritime museum. The tower was originally part of the northern end of The Dusseldorf Castle. The three floors of the tower are from the 13th century. The fourth floor was added in 1552 with Tuscan columns and the fifth floor in round arch style was added in 1845. 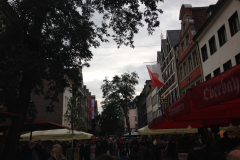 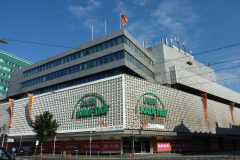 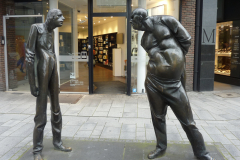 Throughout the city you will find various sculptures. One which caught my eye are these two men. This is a bronze sculpture by Karl-Henning Seemann and called auseinandersetzung (confrontation).

The beautiful promenade along the Rhine are lined with food stalls and historic places is a lovely place for a long walk. In the Dusseldorf marina you can see beautiful yachts and small boats.

Standing on the Rhine river bank, two prominent structures which can be seen are the Rhine Tower, a telecommunications tower which is also the tallest building in Dusseldorf. The Rhine tower has a revolving restaurant and an observation deck at 170 metres. 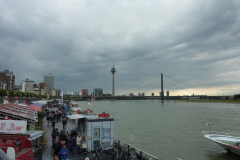 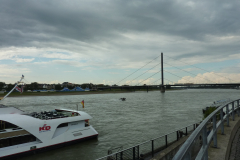 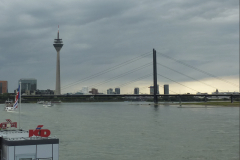 On the Rhine Tower shaft, a clock is displayed using light projection. It is called light time level (Lichtzeitpegel). Designed by Horst H. Baumann, this is the largest digital clock in the world.

The Rhine Knee Bridge is a cable-stayed bridge over the Rhine which was opened in 1969. This is one of seven Rhine bridges in Düsseldorf. The Rhine Knee bridge crosses the Rhine at the section of the meandering Rhine loop which is called the Rhine Knee. 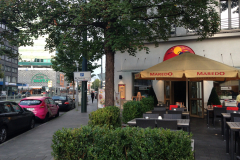 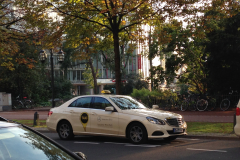 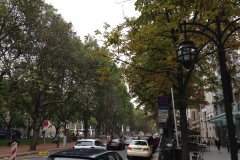 In the west bank of the Rhine are the modern commercial areas. On the Neuer Zollhof area of Dusseldorf, stands three separate buildings. These buildings completed in 1998 were designed by American architect Frank O. Gehry. Many other modern buildings can be seen here too.

Dusseldorf is a beautiful city for a short break. I enjoyed spending my day in the city and as I was walking back to the hotel saw these lovely floral decorations in front of a florist shop and stopped to admire these and take some photos. It was a day well spent. 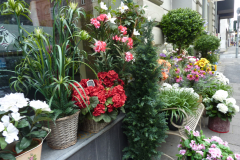 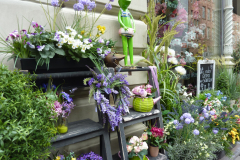 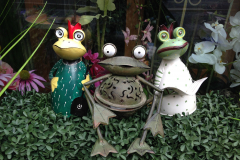 Well, one cannot write about Germany and not talk about Beer. The famous beer of Dusseldorf is called Altbier (“old beer”). It is produced using a traditional recipe. The city of Cologne is famous for it’s Kolsch. You can be mocked if you order your beer from the other city. There is something like a ‘beer-rivalry’ between these two cities.

Your comments and suggestions are most welcome. You can also subscribe for new posts.