After spending a beautiful day at Dusseldorf and a well deserved rest, the next morning after breakfast, I walked up to Dusseldorf Hauptbahnhof. From here I took a train to Cologne Main Station, Köln Hauptbahnhof. The journey time from Dusseldorf to Cologne is around 20 minutes on a fast train and it covers a distance of around 35 kms.

Cologne is the fourth-largest city in Germany after Berlin, Hamburg and Munich on the river Rhine. One of city’s most visited sights is the Cologne Cathedral and the city is also famous for it’s museums. The University of Cologne is one of Europe’s oldest and largest universities. Taking a walk around the city is wonderful experience as it is surrounded by lot of green spaces.

Since I was at Cologne for a few hours, I visited the famous Cologne Cathedral, City Hall and the Farina museum to see the history of cologne making, which originates from the city of Cologne. 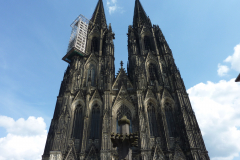 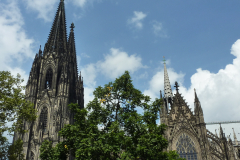 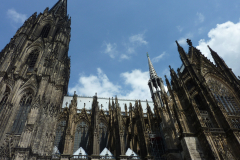 Cologne cathedral which stands just outside the main train station is a medieval church with Gothic architecture. It is the city’s most well known landmark and one of the most visited sites in Cologne. The cathedral, dedicated to St Peter and St Mary, was completed in 1880. Cologne Cathedral is a designated World Heritage site since 1996. 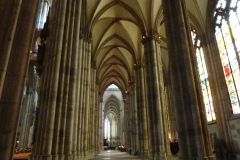 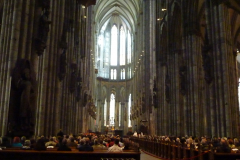 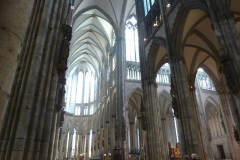 The spectacular view of Cologne can be enjoyed by climbing up the 533 steps to the top of the cathedral. The cathedral towers are the world’s tallest twin spires. The nave of Cologne Cathedral with a length of 144 metres is the longest in Germany.

Inside the cathedral, it houses the Shrine of the Three Kings, which makes this an important pilgrimage site. There are beautiful stained glass windows in the cathedral. 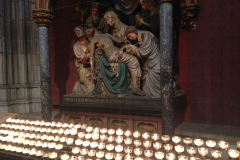 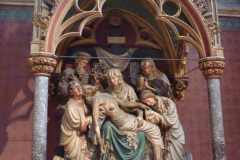 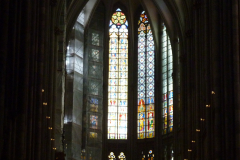 Cologne Cathedral has two pipe organs, the Transept Organ was built in 1948 and the Nave organ was built in 1998 to celebrate Cologne cathedral’s 750 years. The organs are played during services and also for recitals. Between June and September concerts are held every Tuesday evening. 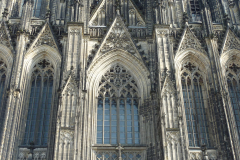 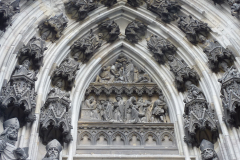 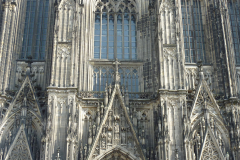 The Cologne City Hall is the oldest city hall in Germany which is still in use. It was founded in the 12th century. The Renaissance-style loggia and tower were added in the 15th century.

The City Hall Tower has a height of 61 metres. It consists of five storeys and its main purpose was to store documents. It houses the city council and has offices of the Lord Mayor. 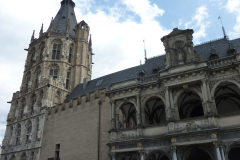 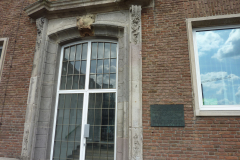 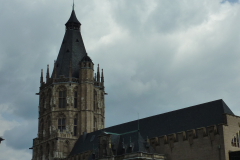 President Kennedy visited Cologne on 23rd June 1963 during his trip to Germany and there is a plaque on the City Hall building to commemorate this visit.

Church of the Immaculate Conception (Minoritenkirche)

Built in the 13th century in Gothic style, the Church of the Immaculate Conception is a Catholic church in Cologne. Inside the church are the tombs of Duns Scotus and Adolph Kolping, both of them were beatified by Pope John Paul II. 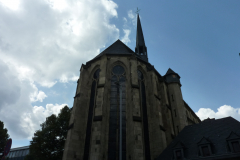 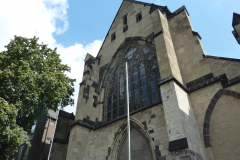 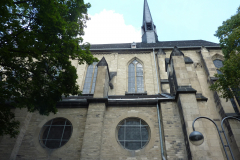 Eau de Cologne is a perfume which originated from Cologne, of course. The perfume was created in 1709 by an Italian perfumer John Maria Farina and he named it the Eau de Cologne.

There is a tour of the Farina Fragrance Museum with the guides explaining the history of the creation of cologne along with a cologne smell testing workshop. There is also a museum shop from where you can purchase various colognes and perfumes. They also sell perfumes to match with your zodiac sign. 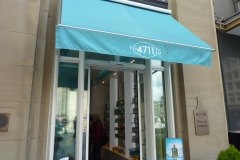 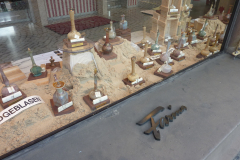 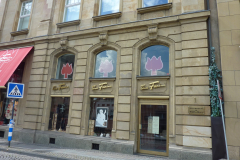 The other cologne company, situated at Glockengasse No. 4711, is famous for the Original Eau de Cologne 4711. Founded by Wilhelm Mülhens, this company has been producing the Eau de Cologne since 1799. You can also visit the museum and buy their products from the 4711 store.

Cologne Train station situated next to Cologne Cathedral, is a regional, national and international transport hub and one of the busiest stations in Germany. The entry level has a huge retail area with around 70 shops and restaurants.

The central station hall of Cologne Train station has a beautiful shell shaped roof with a span of 64 metres. 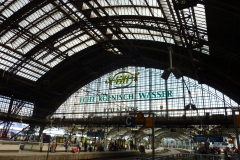 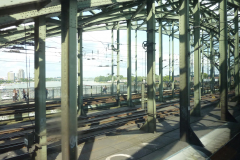 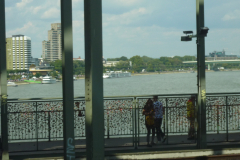 The Hohenzollern Bridge on the Rhine River is just outside Cologne Train station. This Original Cathedral Bridge was a railway and road bridge but after its reconstruction the new bridge named after the house of Hohenzollern, is a railway and pedestrian bridge. It is supposed to be the most heavily used railway bridge in Germany.

One interesting aspect of the Hohenzollern Bridge is that since 2008, people have been putting love padlocks on the bridge. It is now chock-a-block with love padlocks.

Though Cologne can be explored easily on foot, there is also option of enjoying a rides on the various Tour Buses which take you round the city. Some have the hop on hop off option. 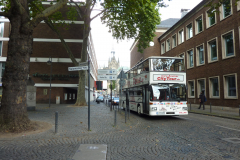 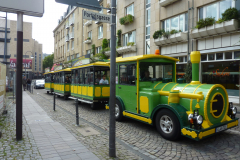 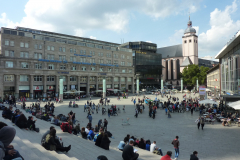 A spacious, public square leading to the stairs of the Cologne Cathedral is a great place to relax and enjoy a quick lunch or coffee.

Well, one cannot write about Germany and not talk about Beer. Cologne is famous for having the most pubs per capita in Germany and for it’s Kolsch beer. You can be mocked if you order the Dusseldorf beer, Altbier while at Cologne. There is something like a ‘beer-rivalry’ between these two cities.

Tweet
Your comments and suggestions are most welcome. You can also subscribe for my new travel stories.