Turkey has always been on my to travel list and though I wanted to visit a lot of places over a long holiday, in the summer of 2019, I decided to start my travel to Turkey by visiting Istanbul over an extended weekend. I took a flight from London Heathrow and landed at the all shiny and bright new Istanbul airport on a hot summer July afternoon. The landing views of Istanbul city, the Bosphorus, the Sea of Marmara and the confluence of Europe and Asia are stunningly beautiful.

I was met at the airport by a friend, who I became friends with during my travel to Bulgaria the year before. To this day we still keep in touch and hope to meet again once we are able to travel in the normal way. My friend had already purchased an Istanbul travel card for me.

From the new airport, we took an airport to city bus to reach the city centre stop near Taksim Square in about an hour. After checking into the hotel, we spent the evening walking around the city. I will write about the Istanbul City sights in a future post as there is a quite a lot to share. In this post I wanted to share one of the experiences that I enjoyed thoroughly. It was a cruise on the Bosphorus, which was very relaxing and also experiencing a lot of history, culture and enjoying some beautiful sights. 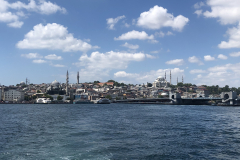 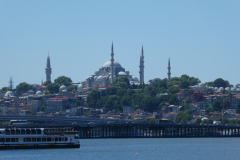 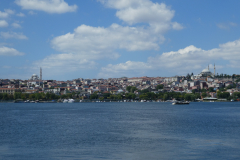 There are various cruise companies and lots of cruise types like day cruises, private ones, ones with lunch and sightseeings, dinner cruises. We opted to travel on a day cruise as it was a bright and sunny day and the blue waters of the Bosphorus looked gorgeous. The cruise was from the European shore towards the Asian shore and back.

Some poet was once known to describe the Bosphorus as “God’s beautiful calligraphy written by ink made out of sapphires”.

The Bosphorus separates but in a way also connects the two continents of Europe and Asia. The cruise took us along the European shore and the return was along the Asian shore. The sights on each side was like the amalgamation of Ottoman and modern architecture. And it is the view of Istanbul’s beautiful skyline which is best enjoyed from the Bosphorus.

As the boat cruises along the blue waters of the Bosphorus, it difficult to decide which side should you look at as both sides are equally breathtaking. I enjoyed the cruise so much that I put away my camera for sometime to enjoy the views as much as possible in that short duration. I took photos of some of the sights, which I am sharing below with a little description for each.

The primary inlet of the Bosphorus in Istanbul is called the Golden Horn and is used as a key waterway. It is a natural estuary that connects with the Bosphorus Strait where the strait meets the Sea of Marmara. It also forms a boundary between the historic centre of Istanbul and the rest of the city. It is in the form of a horn-shaped sheltered harbour. 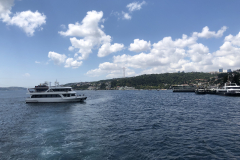 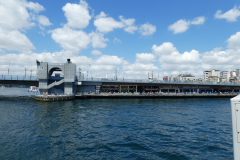 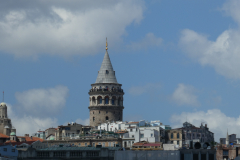 Seraglio Point is a promontory quarter separating the Golden Horn and the Sea of Marmara. The area is where the renowned Topkapi Palace is located. Seraglio Point is included in the historic areas of Istanbul and was added to the UNESCO World Heritage List in 1985.

The Galata Bridge spans the over the Golden Horn linking Eminonu and Beyoglu. This is the 5th bridge in the series of the Galata bridges and was built in 1994. There are pedestrian walkways on both side of the bridge and you can go down to the lower level of the bridge on each side to find the place full of eateries, specialising in fresh fish. The bridge was named after Galata, which is the former name of Karakoy quarter in the Beyoglu district of Istanbul, on the northern shore of the Golden Horn.

In the Karakoy quarter of Istanbul stands a highly visible conical top tower, the Galata Tower. This is a medieval stone tower in the north of the Golden Horn’s junction with the Bosphorus. The cylindrical tower dominates the Istanbul skyline and from it’s top visitors can enjoy a panoramic view of Istanbul’s historic peninsula and the surroundings. 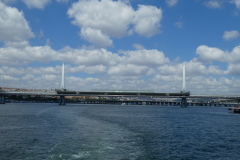 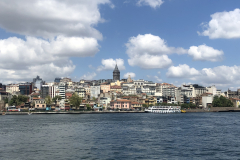 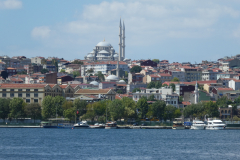 The Golden Horn Metro Bridge is a cable-stayed bridge across the Golden Horn with the M2 line of Istanbul Metro. The bridge has a length of 936 metres and is located between the Galata Bridge and the Ataturk Bridge.

Dolmabahce Palace on the eastern shore of the Bosphorus is the largest palace in Turkey and served as the main administrative centre of the Ottoman Empire. From the cruise boat you can see the Palace Gate to the Bosphorus.

Dolmabahce Mosque is a baroque style mosque adjacent to the Dolmabahce Palace. It was commissioned by the queen mother Bezmi Alem Valide Sultan. 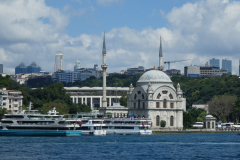 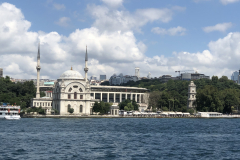 Dolmabahce Clock Tower stands outside Dolmabahce Palace. It stands in front of Imperial Gate on the European shore of the Bosphorus next to Dolmabahce Mosque. The tower is designed in Ottoman neo-baroque style, has 4 sides and is four-story with a height of 27 metres.

Ortakoy means middle village in Turkish. The Ortakoy Mosque is in the Besiktas district of Istanbul and is situated just about in the middle of the European side of the Bosphorus, near the Ortakoy pier square. This is one of the most popular locations on the Bosphorus.

The Bosphorus Bridge, officially know as the 15 July Martyrs Bridge, was the first bridge to be constructed over the Bosphorus. The pontoon bridges were built later and completed in the later part of 1973 to mark the 50th anniversary of the Turkish Republic. This suspension bridge is 1560 metres in length and has a clearance of 64 metres from the water level.

The Bosphorus Bridge is one of three bridges that crosses the Bosphorus Strait connecting the European and Asian sides of Istanbul. It stretches between Ortakoy on the European shore and Beylerbeyi on the Asian shore. 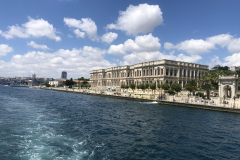 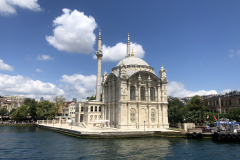 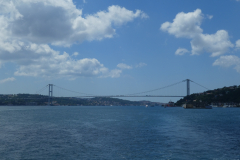 Rumeli Fortress, also known as Rumelian Castle and Roumeli Hissar Castle, is a medieval fortress located on a hillside on the European shore at the narrowest point of the Bosphorus. The neighbourhood in the Istanbul Sariyer district is named after the fortress.

Rumeli fortress was built between 1451 and 1452 by Ottoman Sultan Mehmed II, with readiness for a planned Ottoman siege on the then Byzantine city of Constantinople. The main goal was to cut off maritime military and logistics entering the city through the Bosphorus Strait. This is why the fortress is also called Strait-cutter Castle (Bogazkesen).

Rumeli Fortress’ older sister structure, the Anatolian Fortress (Anadoluhisari), sits on the opposite banks of the Bosphorus. The cannon on the towers was used to command the narrowest part of the Bosphorus, where the strait width is around 660 metres.

The summer palace of Kucuksu, sometimes called the Palace of Göksu, is located on the Asian shore of the Bosphorus. Kucuksu Palace was first built by Mahmut I in 1749. The palace was refurbished and redecorated by Sultan Abdülaziz. It has an elegant edifice, stretching along the Bosphorus. 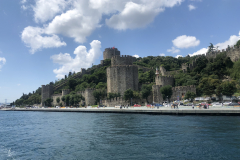 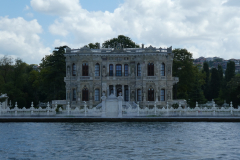 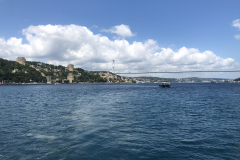 The Fatih Sultan Mehmet Bridge, also known as the Second Bosphorus Bridge, is named after the 15th-century Ottoman Sultan Mehmet the Conqueror. This bridge is a suspension bridge with steel pylons and vertical hangers. The bridge is 1510 metres long and stretches between Hisarustu on the European shore and Kavacik on the Asian shore.

The Yavuz Sultan Selim Bridge, the 3rd bridge over the Bosphorus strait is located towards the entrance of the Black Sea and stretches between Garipce on the European shore and Poyrazkoy on the Asian shore.

Beylerbeyi Palace, built by Sultan Abdulaziz in 1865, is located on the Asian shore of the Bosphorus. Built completely of marble, it is one of  the most extravagant royal houses of the 19th Century. Famous guests in Beylerbeyi Palace include Empress Eugenie, Czar Nicholas Il of Russia and Edward VIII. 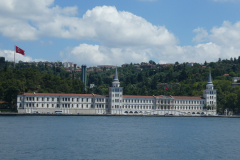 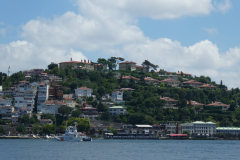 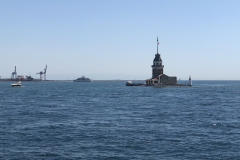 Kuleli Military High School, the oldest military high school in Turkey, is located on the Asian shore of the Bosphorus strait. It was founded by Sultan Abdulmecid I. After the 2016 Turkish coup d état attempt the school was closed and turned into a museum.

Yalı is a collective name for the 620 waterfront houses on the shores of the Bosphorus. These are summer villas lined on the European and Asian shorelines built between the late 17th and early 20th centuries of the Ottoman period.

The Maiden’s Tower is a tower since the Byzantine period on a small islet at the southern entrance of the Bosphorus strait around 200 metres from the coast of Uskudar. Legend says this tower was to protect Constantine’s daughter as she was supposed to be bitten by a snake. The other legend is based on another name of the tower, Leander’s Tower, is that Leander drowned here while attempting to swim the Bosphorus to reach out to his love Hero, a priestess of Aphrodite. 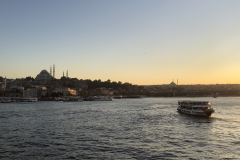 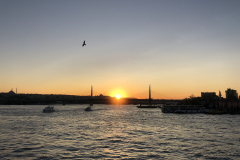 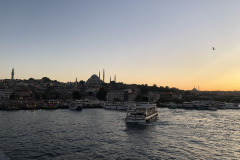 After a wonderful cruise we came back to the Istanbul city centre and enjoyed a beautiful sunset over the Golden Horn. I will write more about the other sights of Istanbul we visited in another post as there is quite a lot to cover in this beautiful city.

Your comments and suggestions are most welcome. You can also subscribe for my new posts.