Sofia, the the capital of Bulgaria is also it’s largest city. Sofia is situated at the foothills of the Vitosha Mountain in the western part of Bulgaria. It is located in the centre of the Balkan peninsula, midway between the Black Sea on the east and the Adriatic Sea on the west and the Aegean Sea is on it’s south.

The city’s history goes back to Thracian people who settled here in the 1400-1300 BC. Lot of archeological discoveries have been made even late in the 20th century and these can be seen through out the city centre and are preserved very nicely with descriptions of the findings [yes, in English! as well].

Sofia in itself is a beautiful and a very walkable city. At every corner there is something connected to ancient or medieval history or later from the communist era.

In this post I have shared some of the sights within city centre which I enjoyed during my visit to Sofia earlier this year. 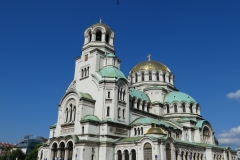 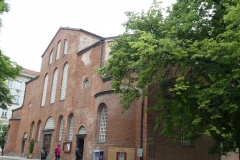 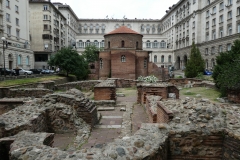 The most famous icon of Sofia is the St. Alexander Nevsky Cathedral. It is a Bulgarian Orthodox cathedral in central Sofia, built in Neo-Byzantine style and is one of the largest Eastern Orthodox cathedrals in the world. It is regarded as one of Sofia’s symbols and is a primary tourist attraction. The St. Alexander Nevsky Cathedral in Sofia can hold up to 10,000 people inside.

The Church of St George is the oldest building in Sofia. It is an early 4th century Christian red brick rotunda. It is located in the courtyard between the Sheraton Sofia Balkan Hotel and the Presidency and is few metres below the main streets. It is considered to be the oldest preserved building in the city. The church is part of a larger archaeological complex and situated in the midst of the remains of the ancient town of Serdica. 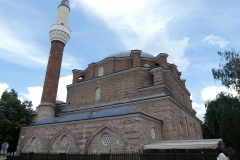 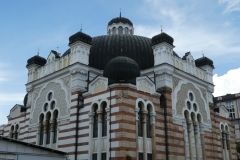 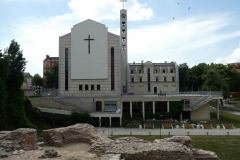 Banya Bashi Mosque in Sofia, was built by the architect and civil engineer Mimar Sinan in 1566, during the years when the Ottomans had control over Sofia. The mosque derives its name from the phrase Banya Bashi, which means many baths. The mosque was actually built over natural thermal spas; one can even see the steam rising from vents in the ground near the mosque walls. The mosque is famous for its large dome and the minaret.

The Sofia Synagogue is the largest synagogue in Southeastern Europe. It is one of the architectural monuments of Sofia and located in the city centre near the Central Market Hall. The Synagogue’s main chandelier weighs 1.7 tons and is the largest in the country.

The Cathedral of St Joseph is the largest Catholic cathedral in Bulgaria and can hold up to 1000 worshippers. It was rebuilt at its previous location after being destroyed by bombs during World War II. The cathedral tower is equipped with four electronically operated bells. 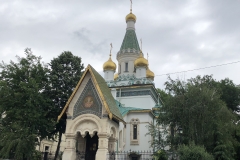 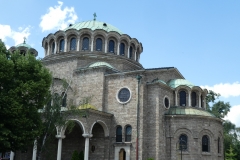 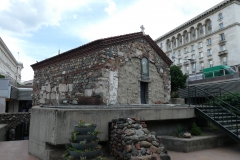 The Russian Church of Sofia, officially known as the Church of St Nicholas the Miracle-Maker is a Russian Orthodox church is located on Tsar Osvoboditel Boulevard of central Sofia.

St. Nedelya Church is an Eastern Orthodox church in Sofia. Sveta Nedelya has been reconstructed many times following its destruction throughout the ages. The present building is one of the famous landmarks of Sofia.

Church of St Petka of the Saddlers

The Church of St Petka of the Saddlers is a small one-naved church in the very heart of Sofia within ruins of ancient Serdica and part of the modern subway. It is dedicated to St Petka, an 11th-century Bulgarian saint. 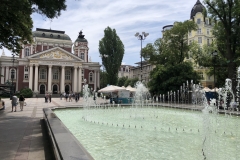 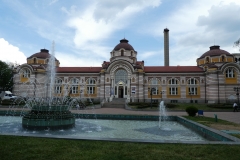 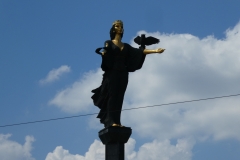 The Ivan Vazov National Theatre is Bulgaria‘s national theatre, and the oldest theatre in the country and one of the important landmarks of Sofia. It is located in the city centre, with the facade facing the fountains of the City Garden. The Neoclassical building, was opened on January 1907.

The Sofia History Museum is dedicated to the ‘History of Sofia’ and is housed in the magnificent former Turkish Mineral Baths building behind the Banya Bashi mosque.

The display rooms dedicated to the Bulgarian royal families of the 19th – 20th centuries is quite interesting and so are the findings from the recent archeological digs around Sofia.

The Statue of Sveta Sofia is a sculpture in the heart of Sofia. The statue of Sveta Sofia was erected in 2000, stands in a one of the main thoroughfares in the city centre. The copper and bronze statue is 24 feet in height and stands on a 48 feet high pedestal. It is adorned with the symbols of power (crown), fame (wreath) and wisdom (owl). 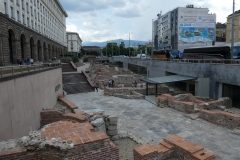 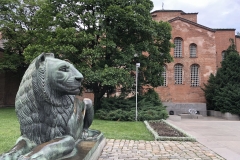 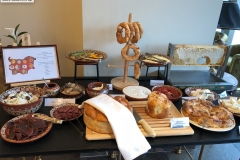 The archeological ruins of Roman ‘Serdica’ in the heart of Sofia is an excellent way to discover it’s history and heritage. The complex is now part of and open-air museum and also part of the city’s Serdica Metro station and can be viewed as you walk through the subways.

The Lion outside the St Sofia Church

Right outside the church of St Sofia, the eternal flame monument is guarded by a giant lion.

And what is travel without tasting the local food. The hotel where I stayed offered a classic Bulgarian spread at breakfast from the various regions of Bulgaria. Top among these to try are Shopska salad, Banista and of course the various cheeses.